Eflyn Announces the Opening of U.S. Office in Orange, California

ORANGE, CA – Eflyn welcomed the new year with the expansion of its business into the United States and the subsequent opening of it’s new Orange, California office. Much like Eflyn’s Canadian Headquarters, the U.S. office features a full showroom, giving visitors the ability to interact with the kiosks and trial the Eflyn lead-generating applications for themselves.  In addition, the U.S. office will be the first location to display Eflyn’s 2020 Product Line including brand new multi-use Free-Standing displays, Catalogue Kiosks, and Wayfinding Solutions.

“We have felt the demand for Eflyn technology in the U.S. for quite some time so we are very excited to finally be expanding into the country with this California office.” Said Rashid Qadri, Founder, and CEO of Eflyn. “Our team has spent countless hours analyzing industry trends and we feel confident that Orange, California is the best place for Eflyn’s expansion.”

With the industry moving towards automation, Eflyn had had immense success in leading the Canadian market with kiosk technology. Eflyn’s Free-Standing Kiosks can be found in a wide range of restaurants and businesses throughout Canada. Their Free-Standing Kiosks can be found in Provincial and Federal Government Buildings such as Library Archives Canada and Ontario Power Generation, academic institutions such as Ryerson University and Geroge Brown College, and even hotel franchises such as Hilton Hotels and Radisson’s across the province.

What they are perhaps most famous for, however, is their Self-Ordering Kiosks which is the first self-service kiosks with modular technology for easy hardware repairs that will not affect the business. These Self-Ordering Kiosks can be found in all Beer Stores and Penguin Pick-Up locations across Ontario among other businesses.

Located at 1912 N Batavia St, Ste J, Eflyn’s U.S. Headquarters is in close proximity to many independent businesses as well as larger corporations. The office is a half-hour drive from the city of Los Angeles and a 15-minute drive from John Wayne Airport in Santa Ana. Eflyn’s U.S. office is now open and taking showroom appointments. If you wish to learn more about Eflyn and book an appointment with a Product Specialist please visit www.eflyn.com. A grand-opening and ribbon-cutting ceremony is scheduled to take place later this month with neighboring businesses, journalists, and community members in attendance.

Product specialists can be made available to the media. For more information visit www.eflyn.com 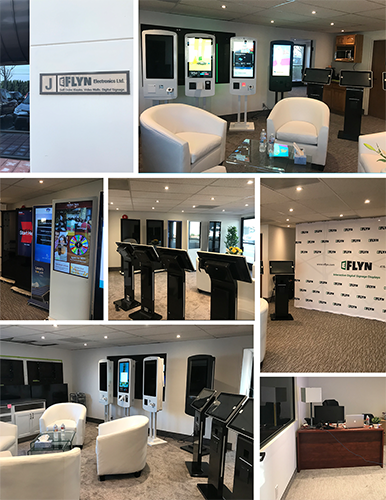 MEET WITH AN EFLYN SPECIALIST

BRING THE POWER OF DIGITAL ENGAGEMENT TO YOUR BUSINESS

Want to learn about digital signage? How about self-serve kiosks or setting up your own video wall? Learn from one of our digital engagement experts about the latest in interactive display technologies and software.

We'll get back to you within 24 hours.

Trademark Legal Notice
Shopify® is the registered trademark of Shopify Inc.
All company, product, and service names used on this website are for identification purposes only. Use of these names, logos, and brands does not imply endorsement.